Posted by Stephen @ Vagbremtechnic on 2nd May 2019

What do you do when you have a 734bhp Audi TT-RS but you need to save as much weight as possible, fit your brakes behind 18” used with drag tyres and stop the vehicle quickly from around 150mph?

This was the brief given to us by APR UK earlier this month (April 2019).

The Car: TTRS 8S with TTE700 turbo, APR software and hardware ( Full details can be found at APR UK)

The three primary areas we had to tackle were Weight, Size and Stopping efficiency, not only for that of a TT-RS 8V but that of a TT-RS tuned by APR UK to over 730bhp and driven in anger at Santa Pod Raceway!

The original 370mm AP 8 piston brakes on the TT-RS as standard perform adequately however are known to have their issues and of course are too heavy, so firstly we removed the Brake Calipers, Carriers and Discs and weighed them so we knew what we were up against.

Stock calipers: 6.28 kg per side including brake pads 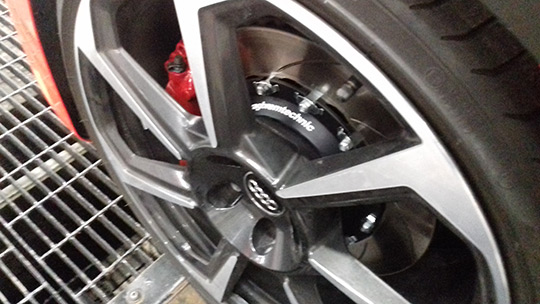 Over the front axle that is over 40kg of braking components.

What could we do to reduce the weight?

We had a number of kits we could choose from in our VAG arsenal and after considering our options we decided on the BK0004 Kit with 343x28mm 2-piece VBT bell and AP rotor combo’ with lightweight Aluminium Brembo 4 Piston Calipers using custom lines built in house. This is a kit we had previously used on KW Suspensions’ S1 Track car with great success.

4 Piston Brembo calipers: 3.305 kg per side Including brake pads

We managed to almost half the weight of the front brakes whilst maintaining braking efficiency and of course being able to fit behind the 18” wheels provided. 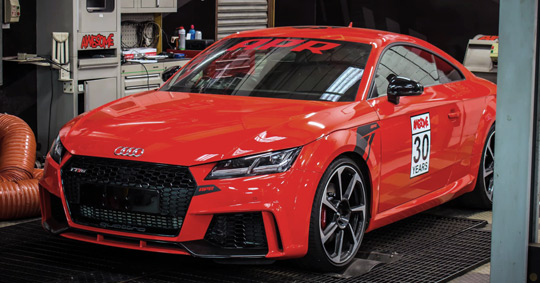 Having the power, and this car has the power, is all well and good when at the drag strip but having the confidence that when the run is over you will stop safely is another thing! Crossing the line at over 140mph and having to stop as quickly as possible in a safe straight line is as important as the run itself, then of course having the equipment to do it all over again safely on the next runs at sometimes at an increased speed is the requirement on the strip!

stopping quickly and true at the end of the run. So far so good, but we knew it all had to be done again and we knew the car would be quicker next time.

Following inspection, the car was ready for its 2nd run where it produced an astonishing ¼ distance covered in 9.7 seconds at 144mph.

At Crail on the car’s second outing it managed an amazing 9.5 second run at 149mph!

We thank APR UK for giving us the opportunity to be involved with such an amazing project, done in a staggering 3 days! And look forward to seeing the TT-RS again as APR are promising to be even quicker next time around.

A video of the car can be found here:

×
Ask The Automotive Experts anything. We will follow up
with you via email within 24-48 hours.
Please answer the following questionnaire
×

Get the latest updates on new products and upcoming sales

We promise to only send you good things